CBD oil or cannabidiol oil has risen up as a chartbuster of late in herbal science. However, most people, when enquiring about the oil end up on the negative side in terms of the image of CBD oil due to its linkage with Cannabis & Marijuana. The reason being an endless list of queries which includes – is it addictive? Does it have side-effects? Does it cause any sense of reverie? Can my pet use it too? How long can it be used & so on? When these questions get answered then an individual finally comes to the decision of actually accepting & adapting it for usage.

In a short span of time, the product has gained a lot of traction among not just medical practitioners but normal individuals as well who research on it everywhere & consult the experts finally adapting it into their line of treatment. The ability of CBD oil to cover various sorts of ailments all in one form of availability (now increasing too), should be given credit for its eminence among people. Also, the fact that it?s a part of the Cannabis & Marijuana family which are mostly looked upon with grey eyes despite THC (a derivative from them used in medical science too) being already present & popular for healing ailments brings the prospect users of CBD in a state of dilemma. But, this dilemma is easy to swim out of with lots of supporting evidence, studies & researches to prove its mettle as a powerful herbal healer which has come up into the good books of the present times after being buried deep down in history for around over 4500 years.

What is CBD oil?

CBD oil is a herbal oil that?s made from the extracts called Cannabinoid found in Cannabis, Marijuana & Industrial Hemp plants. These plants have a plethora of over 104 extracts & terpenes of which, 40% concentration is inhabited by CBD. Out of these extracts, THC or tetrahydrocannabinol had been a more popular remedy until some time ago when CBD made its way back from a historic exile that continued for generations (rediscovered in 1940). One of the best things that CBD brings to the table is the lack of intoxication effect unlike its sister extract THC. This makes it a more preferred option as compared to THC. This feature also keeps it miles away of being used for recreational purposes. Even the World Health Organisation (WHO) has reported – ?cannabidiol is not likely to be abused or create dependence as for other cannabinoids (THC)?.

However, post discovery, it has been shaking off splatters of the stigma that it has carried due to its belongingness to the Cannabis family. It has been a tough journey with medical practitioners finally switching to it for treatment of ailments due to its magical healing abilities & less-serious side-effects as compared to anxiolytics & other pharmaceutical drugs. Besides, it has also gained legalisation in developed countries like USA & UK at different levels which shall help it spread its wings finally throughout the world as a natural way out of various ailments. This legalization has given hopes to a deeper research among the practitioners of the trade.

What are the benefits?

As mentioned earlier, CBD oil brings with it a bunch of benefits. The best part being all-round abilities for curing various ailments which makes it a very powerful healer in terms of efficiency & effectiveness. Not just the anti-intoxication property but also proven benefits in other ailments continues adding to its extensive range of applications.

The various benefits are as follows:

the CBD is more effective than vitamin C and E as a neuroprotective antioxidant and can ameliorate skin conditions such as acne.

The science here is as simple as the English alphabets.Our human body has a specialized system named the Endocannabinoid System (ECS). This, in turn, regulates various functionalities like sleep, appetite, pain & immune system response. The body itself produces Endocannabinoids- neurotransmitters that bind to Cannabinoid receptors in the nervous system. According to the studies, CBD helps reduce chronic pain by influencing the Endocannabinoid receptor activity as a result of which inflammation reduction was seen.

A study on 177 people experiencing cancer-related pain was conducted to find the effect of CBD & THC on pain alleviation during treatment. It was found that those treated with the extract containing both CBD & THC experienced a significant reduction in pain as compared to those who were treated with only the THC extract. During chemotherapy, CBD was also seen aiding lower nausea & vomiting (two very common side-effects).

Though alternatives are there, having a back-up plan doesn?t harm either. Not just this but certain in vitro & animal studies have assessed that CBD might be a possible healer with anti-cancer properties. For example, a test-tube study concluded death in human breast cancer cells with the use of concentrated CBD.


There are known cases of melanoma & carcinoma type cancers being cured by the use of CBD extracts through topical application. Rick Simpson?s example is quite famous because he cured his basal cell carcinoma with cannabis oil and now has his widely distributed line of products.

Studies on CBD treating neurological disorders like epilepsy & multiple sclerosis are new but the results are positive. Another study revealed that CBD oil significantly reduced seizure activity in children with Dravet syndrome, a complex childhood epilepsy disorder, compared to a placebo group. Not just this, treatment with CBD has helped improve quality of life & sleep quality for those having Parkinson?s disease.

How does it feel?


Since CBD oil is used as a cure to various problems, it will also have an effect on how an individual feels after using it. The benefits talked about above are the various tasks which it does. However, what needs to be known is how it feels to have a few drops of CBD oil as a dosage. How it feels has been illustrated in the pointers below:

Any room for side-effects?

Quite naturally, despite having such positive sides of helping in ailments & relaxation in people, there are certain side-effects associated with it too. However, compared to other medications of all categories, the side-effects are quite less in magnitude, but this being said, it is important to mention that the research is still on & there is an ocean of findings to do.

The various side-effects are as below:

According to a review published in the journal Cannabis & Cannabinoid Research documents in 2017, the safety & side effects of CBD were laid down. The review discussed the use of CBD within numerous clinical studies out of which, most were related to epilepsy & psychotic disorders. As per the journal?s conclusions, the most common side effects of CBD usage appeared to be tiredness, diarrhea & changes in both weight & appetite.

CBD interferes with drug metabolism within the liver. This makes it of special consideration &* re-thinking for use for those who are on pharmaceutical medications. CBD interacts well with drug-metabolising enzymes like cytochrome P450 family. 60% content of all pharmaceutical drugs is metabolised by the CYP3A4 enzyme. Coincidentally, this enzyme is responsible for the metabolism of CBD as well. High dose of CBD can temporarily neutralize the liver enzymes, thus interfering with the ways in which this drug affects the body.

Certain pharmaceutical drugs inhibit this enzyme, which may slow the breakdown of CBD & increase its physiological activity. Apart from this, other pharmaceuticals raise the levels of this enzyme resulting in a faster than normal breakdown of CBD. it is hence advisable to consult a physician before taking any dose of pharmaceutical drugs. But, this coin also has two sides as CBD helps liver enzymes in enhancing the levels of enzyme CYP1A1, which plays an important role in breaking down cancer-causing substances like benzopyrene.

In a study it was found that short-term exposure to CBD increased the permeability of the placental barrier, thus placing the foetus at risk from certain substances. This was reported by the American Academy of Pediatrics (AAP) who cautioned pregnant women & nursing mothers to avoid CBD use due to possible adverse developmental effects to their foetus.

This is probably an expected side-effect given CBD?s relation to the cannabis family. The salivary glands also act as an abode of the cannabinoid receptors of the endocannabinoid system. CBD interacts with these receptors & hence causes inhibition of saliva secretion due to which the mouth dries up. CBD oil hence decreases saliva secretion. This, however, can be easily remedied with a glass of water or juice.

In a 2009 study published in the International Journal of Neuroscience documents, CBD was given to patients with dystonic movement disorders. For 6 straight weeks, oral doses of the cannabinoid between 100?600 mg per day were given to prospects alongside standard medications.

As expected there were improvements in movement disorders in all patients. Still, certain side effects were observed such as hypotension (low blood pressure), dry mouth, psychomotor slowing, lightheadedness & sedation. With doses over 300 mg per day, hypokinesia & resting tremor rose up. This drew researchers to the conclusion that CBD has Parkinsonism-aggravating effects in humans.

While in UK, CBD is legal as it is extracted from non-drug strains of cannabis – industrial hemp. Industrial hemp is the approved variety of the cannabis plant. For CBD to be legal in the UK, it has to be as per the norms of the European Union (EU), i.e.n ?it should have naturally high levels of cannabidiol but only trace amounts – 0.2% of the legally-regulated, psychoactive ingredient known as THC (tetrahydrocannabinol) which is found in medical marijuana. Since CBD does not stimulate the psychoactive receptors (CB1 and CB2) which are targeted by marijuana, it does not cause a high & is therefore legal to take.

The herb of the future

With governments accepting the way towards cure from many troubles & ailments with the help of this magic herb, the road to popularity & research has grown by many lanes for CBD. This has come as a major breakthrough to become legal after a long long time given its discovery way back in 1940. Also, given the fact that TCH was discovered 20 years after it & continued to be more popular than CBD also added to CBD?s following of trail. However, it has emerged at the top of the game again & hopefully, with more research & findings after being legalised, CBD & related products would see better days & gift humanity & life better prospects. An immediate effect can be seen as a multiplication in its form of availability like sprays,capsules, gums apart from being available as an oil. 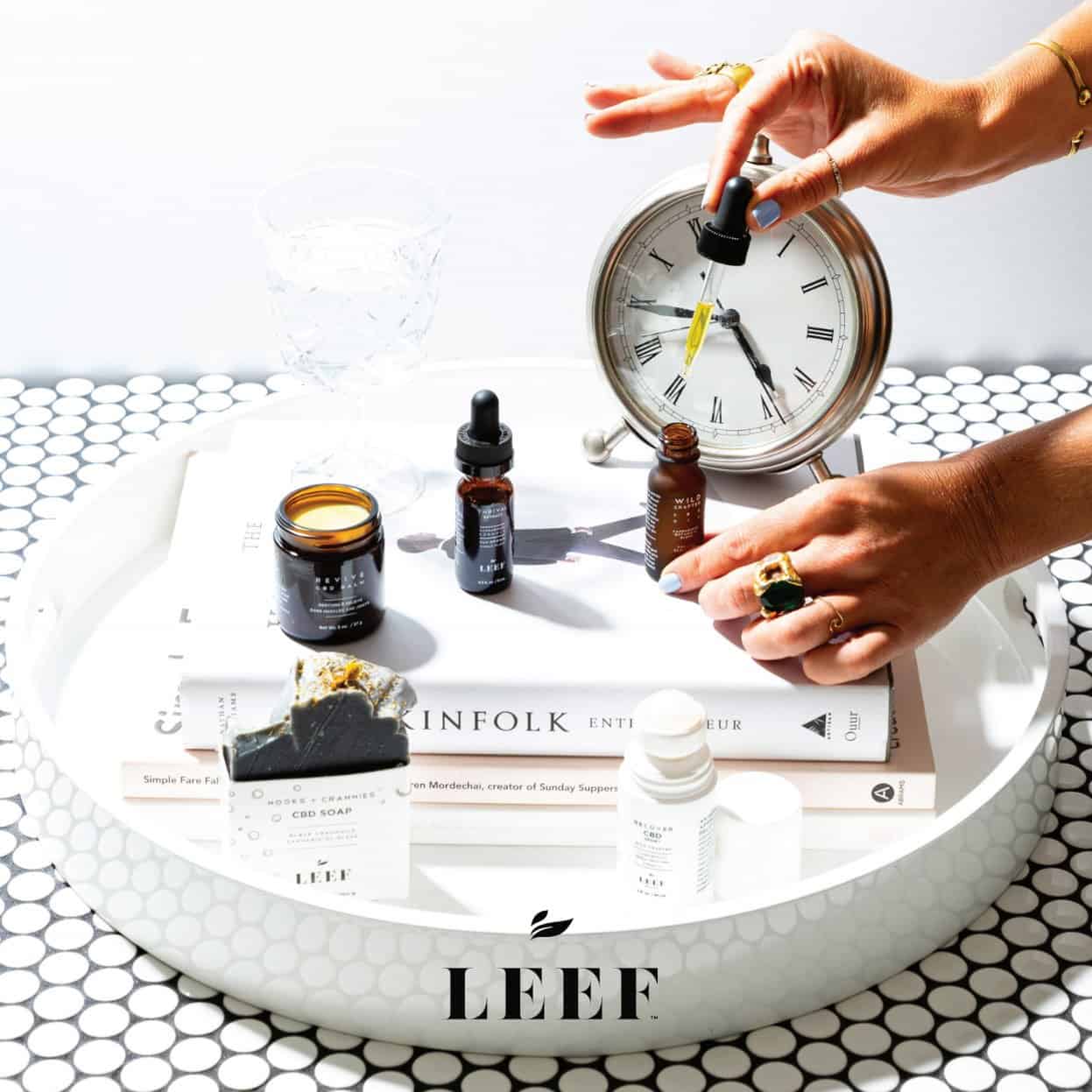 LEEF Organics Review for 2021: What You Should Know

Which States is CBD Legal