It has been 3 years since the Food & Drug Administration (FDA) gave a nod to researchers to study the medicinal values of CBD after a long battle during which the usage, possession & of course the manufacture of CBD products was illegal in America. This led researchers to add to the list of the positive facts related to CBD which already had the back-up of GW Pharmaceuticals since 1998 when they were given the job to study the medicinal benefits of CBD by the Government of Britain. Thus, promising results led to the ease of policies in America as well, where, though it was illegal to manufacture or cultivate cannabis, but ordering & importing CBD products from outside was made legal. As a result, the graph of CBD users kept rising & thus the popularity. Meanwhile, the legal front was also occupied with demands of making CBD legal & this publicized the name of CBD among people.

Now that CBD has been legalized, the number of people using CBD has been growing significant. However, since CBD commes from the cannabis family, which is often associated with the compound tetrahdryo cannabinol (THC), the compound that makes people feel “high” when smoking marijuana, some people wonder “Is CBD addictive?” As a matter of fact, CBD is completely non-addictive and safe to use. Keep reading to learn more about how CBD is non-addictive.

The Difference Between Hemp and Marijuana

Because we are talking about the addictive properties of CBD, it’s first important to understand the difference between the sources of CBD – namely Hemp and Marijuana. Both hemp and marijuana contain CBD. While hemp is from the cannabis sativa plantf family, marijuana can belong to either of two families under cannabis, i.e. cannabis sativa and cannabis indica. Thus, both have cannabinoids due to the lineage but while certain properties remain same, many would differ considerably.

Talking about the differences, the major difference comes in the content of the cannabinoids in both plants. While Hemp is intentionally grown for industrial & medicinal purpose, the content of CBD remains high in it. THC content is minimal based on the legal practices of the country. For America, it shouldn’t be more than 0.3% of THC in hemp. On the other side of the sea, we have marijuana which is cultivated mainly for recreational purpose but has medical properties too. THC content matters here as more the THC, more the intoxication & hence it is high in THC while having less CBD. however, this being said, we can’t undermine the fact that THC also has a variety of medical benefits under its sleeve but again, the high or trance that it creates pushes the users to backfoot quite often.

From here, we get to understand that hemp as extremely low levels of THC which also go undetected in tests if CBD is ingested in moderate dosage. This gives us a fair idea that the amount of THC carried by hemp is so minimal that it is only present for name.

It is a known fact that CBD has endless benefits ranging across multiple ailments & variety in treating both humans & animals. However, since we are discussing about the addictive properties of CBD, it is important to understand the mechanism of CBD’s operation in the first place. This in turn is an essential part of this article since without knowing the way things work, understanding facts uip ahead might be difficult.

There are three different types of cannabinoids namely phytocannabinoids, endocannabinoids & synthetic cannabinoids. While the first one includes those found in the cannabis & hemp plants, the second one is the point of discussion in this section of the article. The third category is of artificial cannabinoid which are synthesised in laboratory.

While THC triggers the release of dopamine in the brain’s pleasure centers, the brain remains at a risk of getting addicted to it. This happens with the interaction of CB1 receptors. Since, the CB1 receptors have no link with CBD, hence there?s no chance of release of dopamine & this is the reason why users feel neither high nor dependent on CBD. in addition to this, there are no withdrawal symptoms associated as well which make it completely safe & non-addictive. In fact, CBD helps to balance the neuroreceptor levels in this entire ECS system. If there?s too much receptors, CBD will balance it & if there’s low levels of it, then also it will balance it. This leaves us with the realisation that the doubted villain of the story is actually the hero.

As per the World Health Organization (WHO) report of 2017, CBD has been found completely safe and free from danger. The entire report explored various angles of CBD as a medicinal drug and all its shades which led to focus on this point of addiction. The report studied the addiction factors as well the dosage of CBD where it was found that extremely high doses of CBD had no such life-threatening effects. A few studies as mentioned in the report have been mentioned below to add authenticity to the fact that CBD is completely non-addictive.

As mentioned in the report, “Single dose administration of cannabidiol has been evaluated in healthy volunteers using a variety of tests of abuse potential as well as physiological effects in a randomized double-blind placebo-controlled trial. An orally administered dose of 600mg of CBD did not differ from placebo on the scales of the Addiction Research Centre Inventory,” it continued, “a 16 item Visual Analogue Mood Scale, subjective level of intoxication or psychotic symptoms.”

Simply put, CBD actually went through quite cool into the test & came out as victorious as ter was nothing in the report that had any doubt on CBD being addictive. To confirm things, the tests were repeated with oral dosage in the second attempt & the results were unchanged. CBD came through easily here as well & thus it was concluded that CBD is completely safe & non-addictive in nature.

With the aforesaid points being covered it is simple to understand that CBD is completely non-addictive in nature. As an icing on the cake, it is also clear that CBD doesn’t cause any sort of withdrawal symptoms as well apart from being safe even in case of an overdose. But, this doesn?t mean that we are safe. As consumers, we must be very careful regarding the type of CBD product we are using as we never know if it might have THC in it in high concentration than the recommended levels & hence might drive us to a bit of dependance & addiction.

Often, certain brands don’t cultivate their own hemp but take it from suppliers without knowing the THC content the plant has & process it further to make the various CBD products. Also, the certifications might be old & un-updated in various cases as suppliers might have been changed, crop quality might have been altered, etc. It is hence necessary to do a purity check by either checking on the company?s background & asking for the latest certification from a third-party lab certifying the product to have THC content (if any) within limits. Also, to make the verification more authentic, we can ourselves get the test done of the product?s sample & know things for ourselves. These things can keep us away from the clutches of addiction from impure CBD products.

In a nutshell, CBD is a completely safe & non-addictive herbal extract that can not push people in the trench of addiction, substance abuse & dependence. So, if you had decided to proceed with CBD products after getting thi question answered then you can proceed with your order. Good luck! 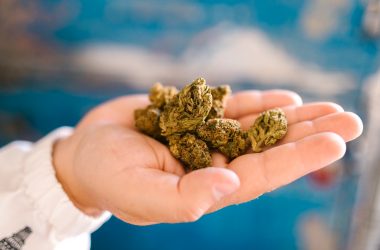 The Ultimate Guide to CBD Flowers